Skip to content
Follow the path beyond point zero!
HomeMusicClassic record of the monthPCP – We Are Frankfurt | Classic Review 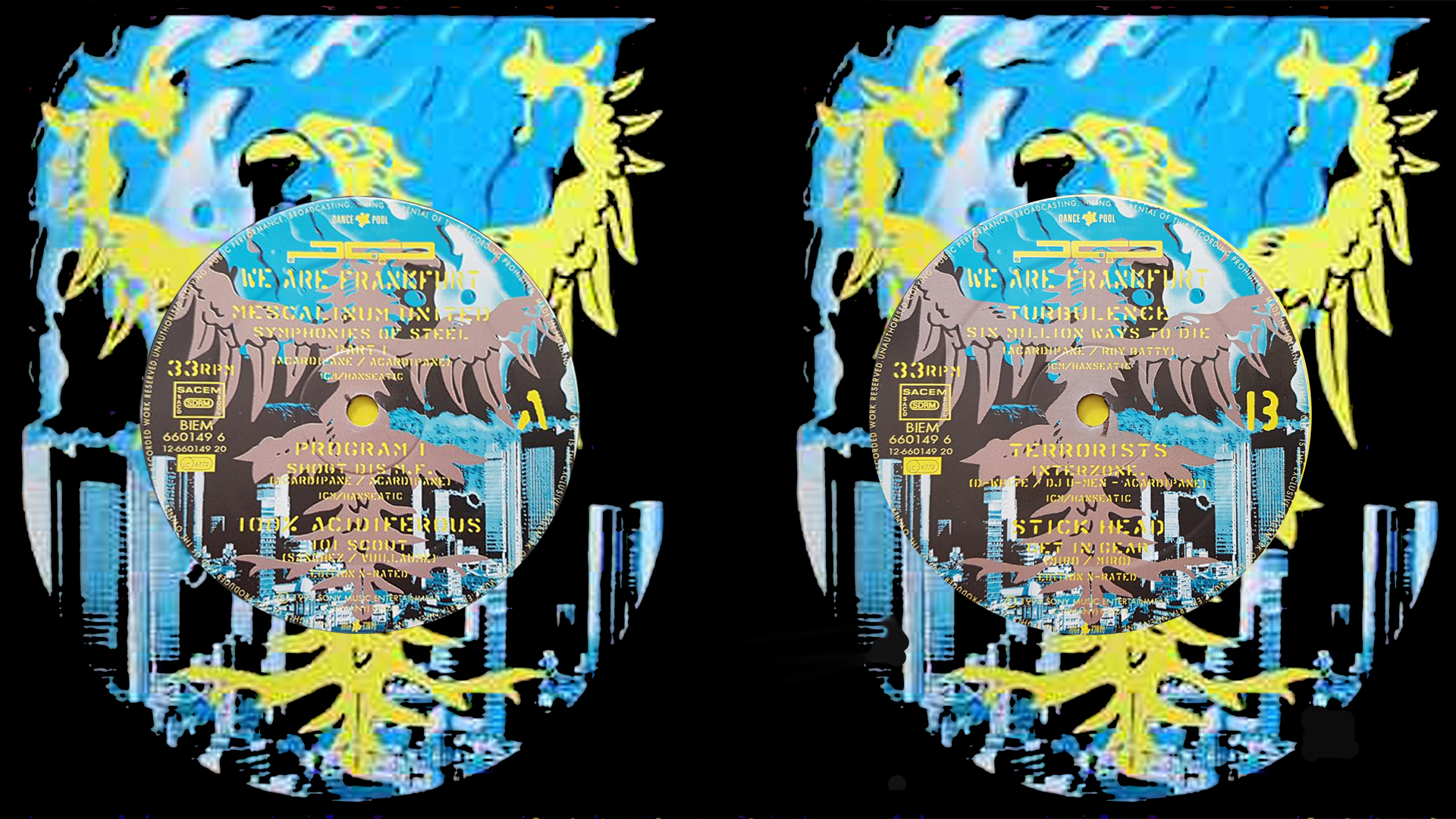 We are back with a new edition of our classic record review, like always brought to you by Dark-T.

The year is 1994 and in the heart of Europe a infamous group was on its peak with a sound that was dark, melancholic, powerfull, sometimes agressive but nonetheless uplifing and surely had that certain street credibillity. Their homebase was Frankfurt and till today they are known as PCP!
But Planet Core Productions was also the mothership label to several sublabels with which they released almost any kind of electronic music, mostly produced by themselfs but also by befriended artists, well known artists from the Frankfurt area and artists who still were at the beginning and who should become popular later.
Back then Planet Core Productions released a series of compilations named Frankfurt Trax. To this point  the releases were published on CD and double 12″ vinyl but for whatever reason the fifth volume received, besides the CD release, a single 12″ 6-track EP only and also wasn’t called Frankfurt Trax but PCP – We Are Frankfurt.

So lets start with the review of the containing traxx, beginning with the track A1 Mescalinum United – Symphonies Of Steel which was also released on the Symphonies Of Steel EP on PCP936 and on the PCP compilation Phuture.
If We Have Arrived was the first Hardcore Techno track ever, then to this point of time, Symphonies Of Steel definitely was the rawest. The track starts out with a gritty and heavily distorted horn synth phrase, a sound like how the horns that treard down the walls of Jericho would have sounded. They are soon accompanied by rough snares and then introduce the mashed kicks which run only short until the first break in which the horns go totally mad. The kicks and snares drop back in and all hell breaks loose! As the track goes on the rhythm prooves its dominance through two typical early 90’s PCP elements, keywords: fat cojones kicks and mid/high frequency distortion! The horn synths keep on with their weird sequences pushing the track forward and leaving the faint hearted in dispair.
This masterpiece of rhythm and noise, dressed in a Hardcore beat in my opinion has received much too little playtime at parties, possibly because DJ’s were to afraid to scare their audience away or because they just couldn’t understand this fine piece of musical art.

The second track on the A side is Shoot Dis M.F. by Program 1 which is one of a whole series of Program 1 traxx that contain that Boyz In Da Hood movie sample.
Starting off with a weird synthesizer sequence, the kick is introduced by a voice stating “Watch me shoot this motherfuck(er)”. The kick sequence continues till the voice interrupts again with the same frase. Distorted snares and claps join into the rhythm and alternate with the kick as the track proceeds till this monotone yet kickin’stomper finds it’s end.

The last track on side A  is  101 Scout by 100% Acidiferous. This Acid banger is one of the few trax not released on the label of the same name.
Starting of with midtone range kickdrums the beat continues after a short break with a delay effect that enhaces the bouncy feel. Shortly after the first acid bleep steps in just to introduce the Acid thunder that is about to come. The intensity of the Acid sounds alternate the more the track progresses. Interestingly the whole track only contains of the kick, its delay effect and the disturbing acid lines. A short but intense jouney of sound that finalizes side one of this EP.

The first track on the B side counts to one of the most famous traxx done by PCP till today, 6 Million Ways To Die from Turbulence was originally released on the Demolition Party EP on SS-13 together with the track Interzone by T.errorists which also is the second track on this side.
The introduction is taken from the Sex Pistols song “My Way” which is then interrupted by radiointerferences and finally a voice sample saying “Good morning boys and Girls”. Off go the kicks accompanied by repetitive “Oh Yeah” shouts, after a short break a voice says “Six million ways to die” repetitivly till the bext break where the voice adds “Choose one”. The kicks continue and are joined by a whipping short synth which force you forward to the big final in which a kickdrum thunder prooves that this is the way to die!

Track B2 bases on vocal samples and is inspired from the movie Naked Lunch. The track Interzone by T.errorists is minimalistic but yet smart and well produced as it contains only 5 different sounds besides the vocals samples.
Starting with random kicks and a voice saying “Interzone” and “We will take you to Interzone”, the track slowly builds up till a break, where the voice says “We’ll contact you there”. Off we go with that famous PCP hoover synth which then introduces us with the kicks and hi-hats, the beat is moving forward and is soon accompanied by claps till another break afer which the synth starts to alternate it’s rythm structure. After another short break a snare line completes the whole track and it’s running to it’s final where the voice again tells us that they will contact us in Interzone!

The final track of the EP is Get In Gear from Stickhead’s first release on Kotzaak, the Slaughterhouse EP.
Starting off with a spooky melody and a heavy breathing sound which is interrupted by a voice yelling “1,2,3,4”, the track then isntantly starts with the kicks and soon percussions also join in to fulfill their unholy work. A short break that is anounced by a growling voice starts with a monotone guitar sound drops in but is quickly undone by the kicks that pushes the track forward mercilessly. A break in the middle of the track ends the guitar sound and introduces a short basssynth rythm that then interacts with the kicks till the giutar drops back in and announces the final in which makes the kicks go mad before the guitar fades out slowly.

For a record of an age of almost a quarter of a century, this classic record still is quite cheap to purchase, ranging from €15,- for a Very Good + quality up to €40,- in Mint quality on Discogs, even though you maybe won’t find it at the record store around the corner.