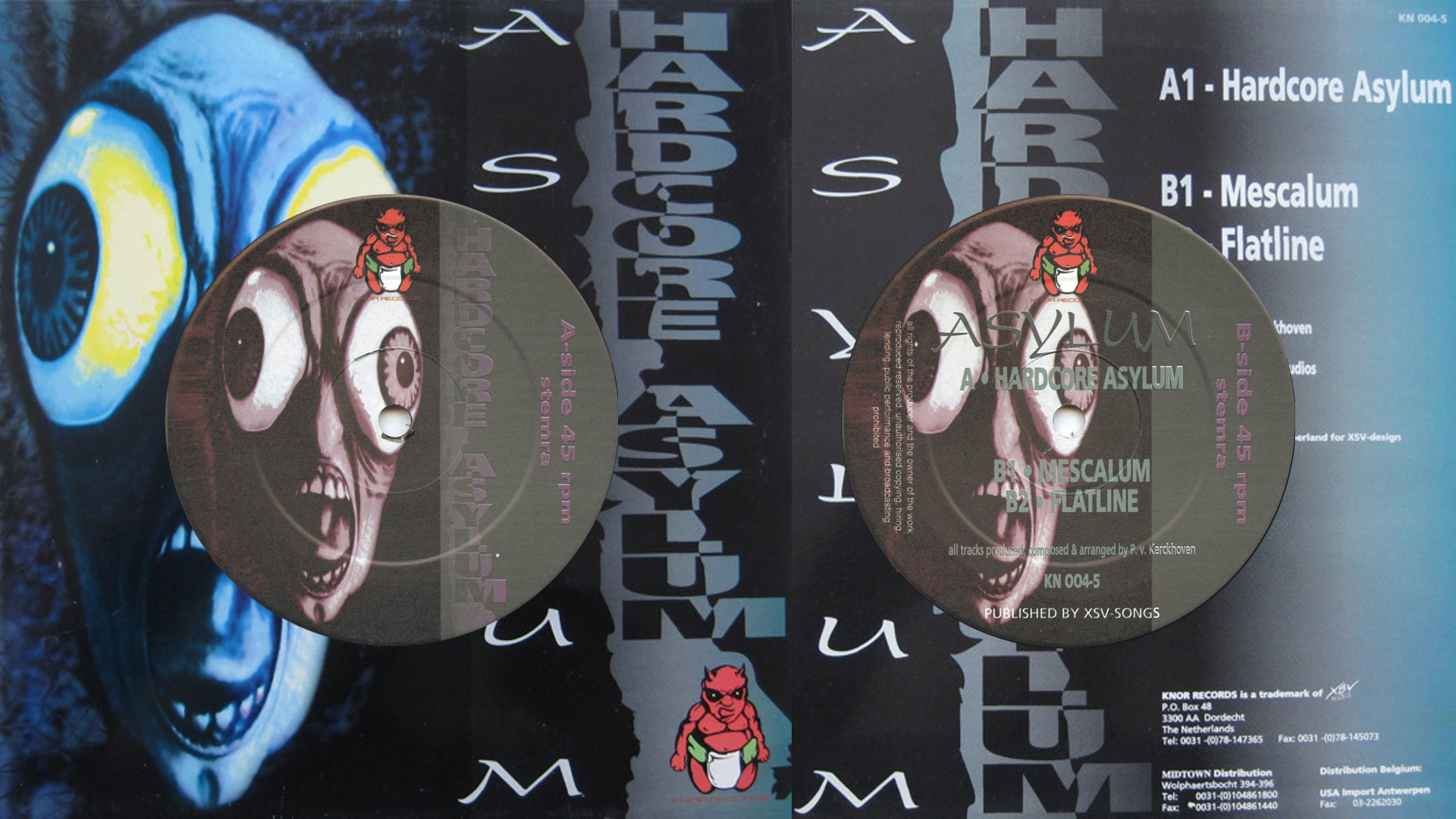 Welcome back to the classic record review, as always presented by Dark-T!

This time we are going back to 1993 with this production from Asylum who is better known as DJ Ruffneck aka Patrick Van Kerckhoven. I guess most of you should know who Van Kerckhoven is and that he is one of the four main influential figures besides Paul Elstak, Lenny Dee and Marc Acardipane when it comes to the development of Hardcoretechno music. Already active since 1990 he was co-founder of the legendary 80Aum Records, creator of the infamous Ruffneck Records, its follow up Gangsta Audiovisuals and is nowadays running Enzyme Records. With this release on K.N.O.R. Records we have a record that is on one side quite U.K. influenced and diverse but yet stays on its hard and gloomy path on the other.

So let’s have a look at the track “Hardcore Asylum” on the Side A. A repetitive voice is interrupted by another voice srceaming “Hardcore Desire” which leads to a agressive breakbeat attack supported by Oldschool Hip-Hop typical sample snippets. Industrial-like hammer-on-anvil sounds lead to the break after which a bold lead synth introduces a heavy kickdrum. The screams continue and rave signals underline the order to dance till you drop. The track is the complete opposite of what U.K. Breakbeat Hardcore with its piano breaks and pitched female voice samples represented at that time; this is the evil brother Cain ready to crack your skull wide open. You can clearly hear the influences of U.K. Breakbeat Hardcore on Van Kerckhoven and his desire to create another version of the same, not happy but evil and agressive.

Side B starts with the track “Mescalum”, a straight pitchdark Hardcore stomper. No prisoners are made here, the track directely starts with a pattern of claps, an evil synth stab is leading to uncompromising kicks and punch you in the guts till the main track break unveils a fierce rave synth sound that tells its unholy story and then jumps onto the kicks to continue their hellish ride. There are no voice samples in this one and the gloomy atmosphere spreads its wings, carried by the maybe highest amount of darkness that was possible for Rotterdam style Hardcore at this time. An all-time classic track that was also honoured with a release on the the first edition of the Thunderdome compilation series.

The track B2 is named “Flatline” and again moves more into the U.K. Breakbeat Hardcore influences of Van Kerckhovens productions. It starts out with a medical heart check pulse sound sample that then drops to a zero tone after which a female voice annouces “Flatline”, but a male voice responds with “Bullshit”. Hardcore breaks and rave stabs are jumping in and are carrying the track, supported by the voices till a kickdrum paired with a hoover like synth pad are slowly fading into the track and displacing the breakbeats. The attentive listener will also recognize a little synth stab joining into the sound melange that seems to be a sample of the main synth stab from the track “Der Klang der Familie“. Now the track has arrived in a Rotterdam style Hardcore atmosphere but the breaks show up once in a while again till the track finishes with a flatline sound.

The traxx “Hardcore Asylum” and “Flatline” stand for a time period when genre boundaries weren’t so high yet, Breakbeat Hardcore like traxx were released more often in NL, besides of course on Ruffneck Records also on labels like Rotterdam Records. This artform of crossing over Hardcoretechno and Hardcore Breakbeat was lost in dutch productions in the mid 90s but experienced a ressurection in the early 2000s with the rise of Crossbreed Hardcore D’nB.

Like always with such old records they will be quite hard to find at your record dealer around the corner but are available quite cheap in at least VG+ quality  for a starting price of about €7,- on Discogs.